Ireland is not on track to meet the mandatory target, under the EU Renewable Energy Directive, of achieving at least a 16 per cent renewable energy share of our energy usage by 2020. Brian Ó Gallachóir, Professor of Energy Engineering, UCC and Director of the MaREI Centre writes.

However, electricity accounts for just a fifth of the overall energy we use, so this 25 per cent RES-E share represents just 5 per cent of our overall energy use. Non-electrical transport energy and thermal energy each account for two-fifths of Ireland’s energy use. Meanwhile, renewable transport and in particular, renewable heat have largely been neglected in much of the public discussions on renewable energy and in terms of policy development. The most significant policy gap is the absence of a support mechanism for renewable heat. Increasing the share of biofuels in road transport has a potentially key role to play. Increasing the share of renewable heat and renewable transport energy also contributes to Ireland meeting the mandatory 2020 GHG emissions reduction target. Renewable electricity contributes nothing to our EU emissions reduction targets because the targets relate to sectors outside of electricity and large industry. Beyond 2020, EU legislation is being finalised that will ensure our 16 per cent target will continue to be legally binding until 2030.

In addition, each member state has a mandatory target to achieve a minimum of 10 per cent of road and rail transport energy from renewable sources (10 per cent RES-T). There are specific limitations on the use of biofuels with respect to meeting this target. Biofuels can only be counted if they meet a number of sustainability criteria that become more stringent as we approach 2020. A revision to the Renewable Energy Directive in 2015 limits to 7 per cent RES-T the level that can be provided from biofuels from ‘food’ crops. In addition, weightings are used to increase the use of biofuels from waste and from second and third generation biofuels and to encourage the penetration of electric vehicles (and the increased share of renewable energy in electricity to charge them). To measure the contribution of these favoured biofuels towards the 10 per cent RES-T target, their energy contribution is increased by a weighting of two. The renewable electricity portion of electricity used to charge electric vehicles is also increased, by a weighting of five. It is important to note that these weightings apply to the RES-T target only and not to the overall RES target.

While all of these modal targets pose significant challenges, the primary focus of discussion and policy development has been on achieving the 40 per cent RES-E target, which is sometimes incorrectly referred to as “Ireland’s renewable energy target” or as being “mandatory” in the context of the EU Renewable Energy Directive. Our mandatory EU targets are to achieve a 16 per cent renewable energy share of overall energy by 2020 and to achieve a 10 per cent renewable share of road and rail transport by 2020. The 40 per cent RES-E target represents one element by which Ireland has decided to achieve the mandatory EU Directive target.

“renewable transport and in particular, renewable heat have largely been neglected in much of the public discussions on renewable energy and in terms of policy development.”

The development of renewable energy in Ireland since 1990 is illustrated in Figure 1 (overleaf), where the share of energy use is shown, quantified as per the EU Renewable Energy Directive definition. During the 1990s, Ireland’s renewable energy contribution remained low (approximately 2 per cent), dominated by biomass use and hydro power. This was largely due to the use of waste wood for heat in the wood processing industry and due to the roll-out of hydro power in Ireland in the 1950s as part of the rural electrification programme.

It is also evident from Figure 1 that in the period since 2003, there was a significant growth in wind energy that has made a key contribution to the overall RES growth to 9.1 per cent of energy use by 2015 (the 2016 energy balance suggests no growth in renewable energy in 2016). This represents a significant policy success story that was driven by establishing a clear target, by achieving collective buy-in to a strategy that was formulated with key stakeholders and through continuous adjustments as required of market support measures, grid connection policy and planning process.

It is less evident from Figure 1 that biomass has also grown (although clearly not as significantly as wind energy) in this period, due to an increase in biomass for heating but also more recently due to the growth in biofuels in transport, the latter also stimulated by policy support, most notably the Biofuels Obligation Scheme.

The contribution of the different modal shares of renewable energy (i.e. in electricity, heat and transport energy) to the overall RES share of 9.1 per cent is shown in Figure 2. The significant growth in wind energy has resulted in renewable electricity now representing 25 per cent of Ireland’s electricity use and 5.5 per cent of overall energy use. Renewable heat (largely bioenergy in the form of wood) represents 6.5 per cent of Ireland’s thermal energy needs and 2.5 per cent of overall energy use. Renewable transport energy in 2015 accounted for 5.7 per cent RES-T (or 3.3 per cent if the weightings that apply to biofuels from waste are excluded, pointing to the significant proportion of biofuels from used cooking oil). This contributed just 1.1 per cent to overall RES as shown in Figure 2. Summarising the relationship between modal renewable energy shares and how these contribute to the overall renewable energy share of energy use.

The key issue here is that electricity represents one-fifth of our energy use, while transport and heat each represent nearly two-fifths. This explains why the 6.5 per cent RES-H share equates to 2.5 per cent RES, while 25 per cent RES-E equates to just 5.5 per cent RES. For RES-T, the same does not readily apply due to i) the weightings applied and ii) the denominator is limited to road and rail transport. 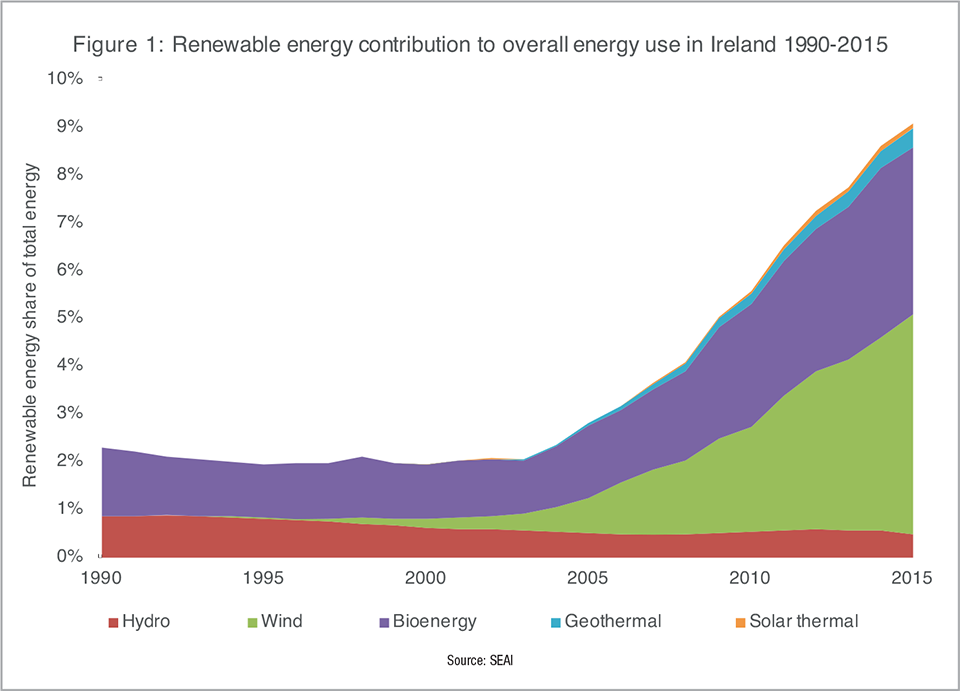 How can we meet our mandatory 2020 target?

Based on a very simplified extrapolation forward to 2020, we can use the weightings to explore what might happen if we do achieve the 40 per cent RES-E target but make no further progress in RES-H and RES-T. This is clearly crude but usefully illustrates the problem associated with a narrow focus on RES-E. Assuming no changes other than increasing RES-E, this suggests RES-E will contribute 9 per cent RES, which in addition to the 1.1 per cent RES from renewable transport and the 2.5 per cent RES from renewable heat means that Ireland would achieve 12 per cent-13 per cent renewable share of energy use by 2020. This remains a significant distance from the target of 16 per cent and 60 per cent to bridge the gap, if RES-H and RES-T do not increase.

Firstly, the scheme has increased the levels of blended biofuels in the petrol and diesel that we consume, with the share (of road transport fuels) by volume increasing to 8.7 per cent in 2017. However, in terms of the contribution to the 16 per cent RES target, we need to be conscious that (a) the share is lower in energy terms (than in volume terms) due to the differences in calorific values between biofuels and petroleum products and (b) weightings are applied to certain biofuels (e.g. biofuels wastes are counted twice) in terms of compliance with the 8.7 per cent 2017 goal that do not apply to the overall RES target and (c) when calculating the contribution to the overall RES share, all transport energy is considered (i.e. including aviation), not just road and rail transport energy.

Secondly, there are limits to the extent to which blending may occur before it may impact on standard car warranties. In the case of diesel engines, ASTM International develops specifications for conventional diesel fuel (ASTM D975). These specifications allow for biodiesel concentrations of up to 5 per cent (B5). Regarding petrol engines, E10 is a low-level blend composed of 10 per cent ethanol and 90 per cent gasoline. It is classified as “substantially similar” to gasoline by the US Environmental Protection Agency (EPA) and is legal for use in any gasoline-powered vehicle. This still does allow for a significant increase in biofuel penetration (petrol to 10 per cent, diesel to 5 per cent, in both cases unweighted) although the dieselisation of the fleet will impact here as a limiting factor. There are interesting approaches under development to address this constraint including renewable diesel, based on hydrotreated vegetable oil (sometimes referred to as renewable diesel), which is indistinguishable (by the car) from diesel fossil fuel and allows significant increases in the share of biofuels in diesel.

There are, however, technology options for renewable energy in transport that are available in addition to increasing the blending of biofuels. While electric vehicles have had a significant focus of policy debate (including a target for 2020, grant support, reduced tax and roll-out of infrastructure), the role of compressed natural gas (CNG) vehicles have received less attention. Energy Cork, an industry lead cluster in Cork has prioritised CNG vehicles for freight and public transport in conjunction with supporting the upgrading of biogas to biomethane for injection into the gas network. This builds on collaborative work between Gas Networks Ireland who are rolling out CNG refuelling facilities, University College Cork who are researching biomethane, Cork City Council and customers (including Bus Éireann and Celtic Linen) who have used CNG vehicles. The 2015 Energy White Paper inclusion of a green bus fund together with previous budget measures reducing excise for CNG as a transport fuel may provide a significant boost to this development. 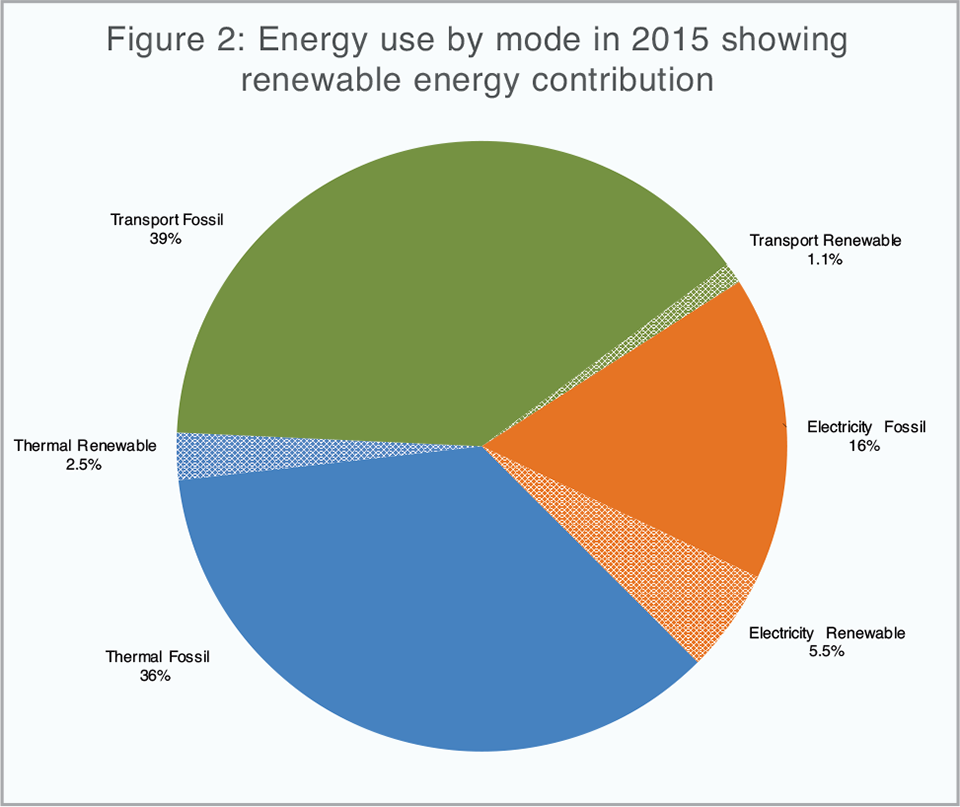 In order to meet our renewable energy target, renewable heat is where the real challenges exist but also where the potential opportunities lie. At least one of the modal targets needs to be increased to address the previously mentioned accounting issues associated with renewable transport energy (including biofuels weightings). Increasing the RES-E target beyond 40 per cent is challenging due to technical constraints in integrating variable, non-synchronous renewable electricity into the grid. The 40 per cent RES-E target requires EirGrid to be able to accommodate a 75 per cent share of wind and solar instantaneously (known as the SNSP limit). Growing from the current 60 per cent to a 75 per cent SNSP limit by 2020 is already challenging without seeking to go beyond that level. This is what would be necessary to exceed the 40 per cent RES-E target by 2020. Increasing RES-T is challenging because of the blending limits for biodiesel and ethanol, the timing required for CNG refuelling infrastructure (to enable biogas in transport) and the timing required for establishing renewable diesel infrastructure at the Whitegate refinery.

This is all very challenging given the short timeframe within which this needs to be achieved. The renewable heat incentive (RHI) scheme would need to be established urgently and rapidly implemented. Most of the changes would need to be in place by the end of 2019 to contribute to renewable energy usage in the year 2020. This requires a strategy that has buy-in from key national stakeholders coupled with an action plan to deliver the strategy (The 19 actions listed in the 2014 Draft Bioenergy Plan provide a useful starting point. It is worth noting, however, that there was a Bioenergy Action Plan in place that was published in 2007, but delivery has been piecemeal and has not resulted in a significant increase in renewable heat). A rigorous monitoring process is also essential to assess whether progress is being made and that adjustments are made as necessary to ensure the pathway towards the 2020 target is achieved in a timely manner. And of course, we need to learn from the mistakes of the failed RHI scheme that was implemented in Northern Ireland.

It is not clear at this point whether meeting Ireland’s mandatory 16 per cent renewable share of energy use is achievable. It is clear that we are not currently on track and that it is very challenging. It is also clear that without an ambitious, successful RHI scheme we are not going to meet our 2020 targets.